Last week the Scottish Government announced it would be introducing a new benefit for low income families in Scotland, the Scottish Child Payment. The new payment will be introduced in stages, first, from March 2021 for children under 6 and then expanding to under 16s by the end of 2022.

From these dates each eligible child in families receiving a qualifying benefit will receive £10 per week, i.e. there is no cap on the  number of children that can receive the payment in each family.

The aim of the new benefit is to reduce levels of child poverty in Scotland. Accordingly, rather than being universal, is it targeted at families living in poverty. After considering several policy options the Scottish Government settled on making the payment a ‘passported’ benefit, where eligibility is deduced from entitlement to other benefits.

The new payment is undoubtedly good news and so it seems churlish to quibble about the people who will miss out, who are relatively few in comparison with the estimated 410,000 who will eventually gain. But due to the cliff-edge nature of eligibility for the new payment there will be some families who won’t receive the annual amount of £520 per child due to their earnings being just a few pounds above the eligibility level. Equivalently, they would have qualified for the full amount with a small reduction in their earnings.

Reading the policy document it seems unlikely this is an intention of the scheme, especially because it means the group of households who earn just too much to qualify for the new benefit include some who would have qualified but for cuts to welfare. In effect these families will lose twice over.

Maybe changes can be made to the Scottish Child Payment in the future to alleviate the issue. Though Social Security Scotland would be wary of changes that slowed down implementation, it seems inevitable that some kind of income test will be introduced after the policy is rolled-out. Once income can be measured it would then be possible to design a ‘tapered’ system to withdraw benefit gradually.

Quibbles notwithstanding, we join the welcome party for the new benefit. We have already added signposting of eligibility to the Other Entitlements section of the results page of our calculator (example below) ready for when the scheme opens for claimants next year. Let us know what you think. 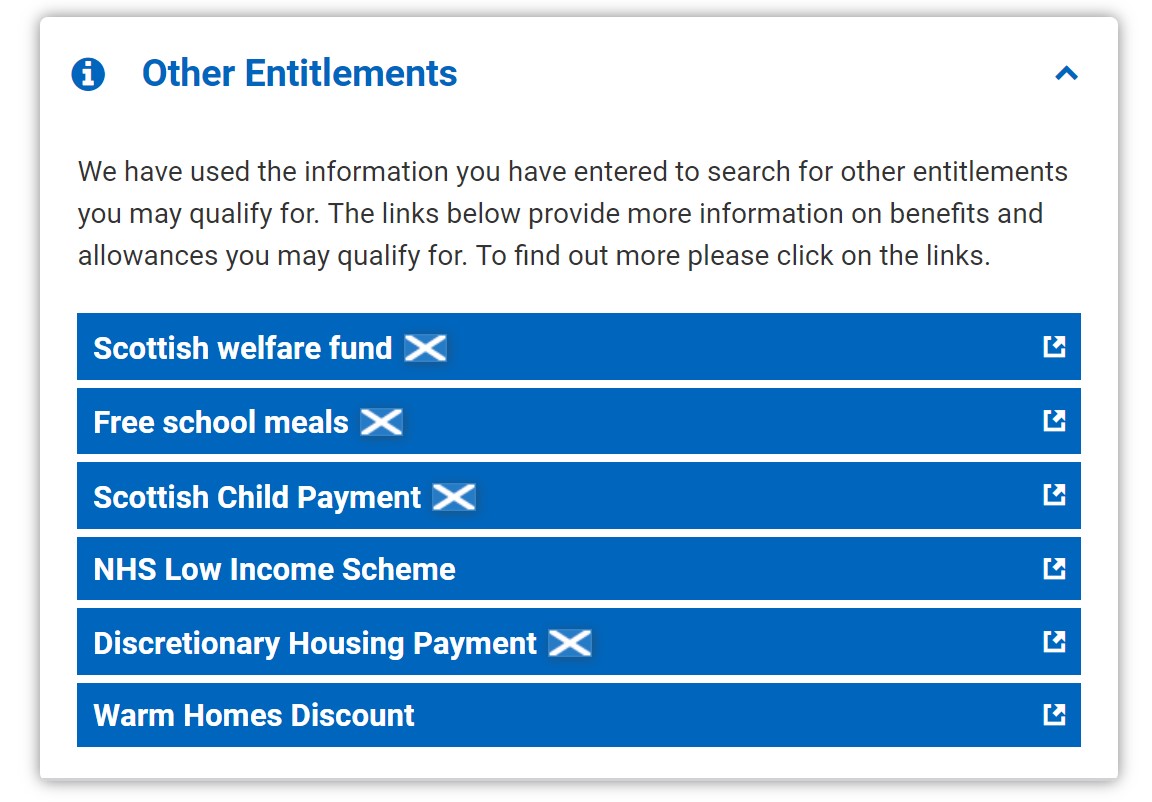