Yesterday's Budget gave some short-term help to benefit recipients but did little to address long-term issues with the system. Several measures to protect people from the financial impact of coronavirus were extended, and a few more were bought forward, but unless further changes are made we will be back to the pre-coronavirus system by the Autumn.

Below I’ve highlighted the welfare changes announced by the Chancellor with details on how we’ve implemented (or plan to implement) them in our benefits calculators.

This is the big issue we were all waiting to find out because it affects the 5 million low income households across the UK who already claim Universal Credit, as well as anyone who starts a new claim. But rather than go all in (by keeping the £20 weekly uplift indefinitely, or for another year at least) or out (reverting back to the pre-pandemic standard allowance) the Chancellor stuck himself in the middle by continuing the temporary increase for another six months.

We welcome the decision to extend the uplift for another six months, though making it permanent would have been preferable.

The main problem with this decision is that the extra support still isn’t reaching people on legacy benefits. It means people who are still on legacy benefits face a difficult decision about whether to move to Universal Credit to get this extra £20 a week.

Because of the way Universal Credit works it’s important that people check how they are affected individually, because the amounts provided in comparison with legacy benefits vary a lot. Some households will be financially better off claiming Universal Credit even without the £20 uplift while others will still be worse despite the extra £20 a week (for six months).

To help guide people thinking about this we’ve added extra information to their Universal Credit calculation results so they can see how their award could be affected from October 2021 onwards. 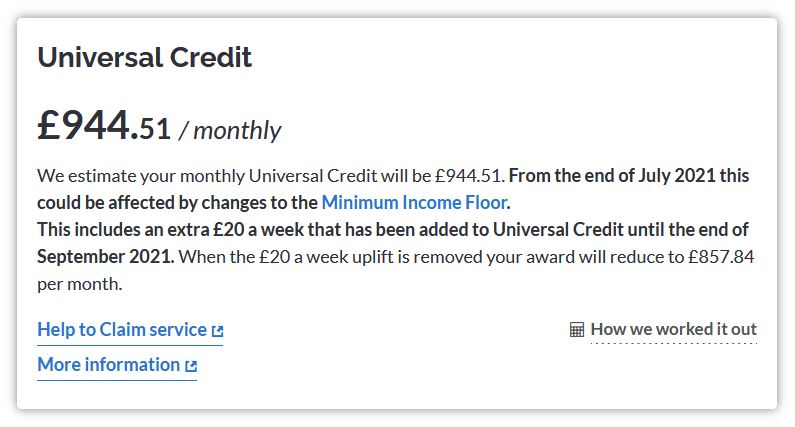 Image: Guidance for UC claimants about the end of the £20 a week uplift

We also saw a three month extension to the suspension of the Minimum Income Floor (MIF) requirements for self-employed Universal Credit claimants. This will now be in place until the end of July 2021, rather than coming back into force at the end of April. From August the government has said the MIF will be gradually reintroduced and work coaches will be able to apply discretion to it being used in individual cases if they think someone’s self-employed earnings are still being affected by Covid-19 restrictions.

The surplus earnings threshold for self-employed people is also being maintained at its current level of £2,500. This will now last until April 2022 when it is then planned to drop to £300. However, this has been the intention since Universal Credit first launched in 2013 and we’ve yet to see it implemented, so our guess at entitledto HQ is that this may be maintained a little while longer.

Finally, the changes planned for debt deductions from UC and advance repayments of UC in October 2021, are being bought forward to April 2021. From this date the maximum rate at which deductions can be made from a Universal Credit award will reduce from 30% to 25% of the standard allowance and the period over which Universal Credit advances will be recovered will increase from 12 to 24 months.

Due to the fact that tax credits are an annual entitlement, rather than a monthly entitlement like Universal Credit, it is not possible to implement an increase for 6 months only. Instead the extra £20 a week is being implemented as a one-off £500 payment for tax credit claimants.

Anyone entitled to the uplift (because they are in work, or were before the pandemic) who was claiming tax credits on 2 March 2021 will automatically receive the £500 payment by the end of April 2021.

As this is currently the only detail available on this policy the calculator informs those eligible about the payment via the message below. We decided not to include the £500 in the tax credit estimate because it can’t be simply split into a weekly or monthly amount.

We believe the payment will not count as income for other benefits, and so will not affect our other benefit estimates. If this situation changes and we receive more guidance we will update the calculator accordingly. 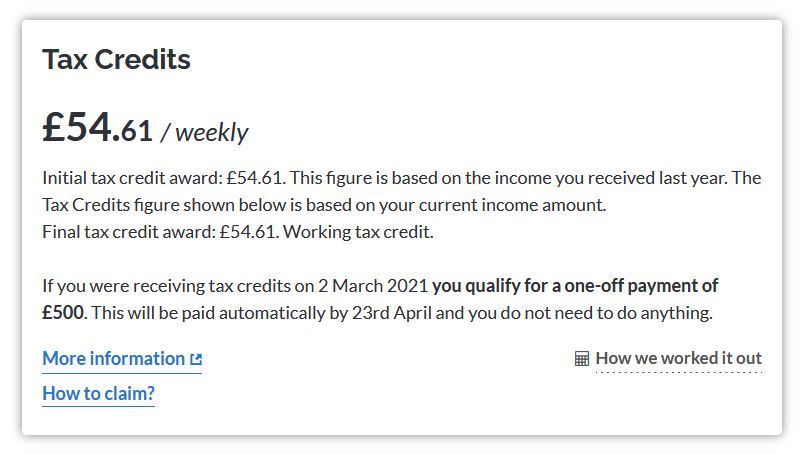 Image: Guidance for tax credits claimants about the one-off £500 payment

The government will continue to treat Working Tax Credit claimants who are working reduced hours due to coronavirus as working their normal hours until the Job Retention Scheme closes. This means they will not be asked to claim Universal Credit if their new hours are below those needed to still be eligible for WTC (16, 24 or 30 depending on their circumstances).

It was no surprise the furlough payment to support employed people affected by Covid-19 would continue past the previous deadline of 30 April 2021. It will now run until the end of September 2021, with the employee continuing to receive 80% of their salary up to a total of £2,500 a month for hours not worked, and the following contributions required by employers:

To match support for the employed, help for self-employed people affected by Covid-19 has also been extended until September 2021. Details of the fourth expected payment were revealed and a new fifth payment was announced, as follows:

Covers the period from 1 February 2021 to the end of April 2021. During this time eligible people will be able to apply for a taxable grant based on 80% of their average monthly profits, capped at a maximum of £2,500 a month. Applications open in late April 2021 until 31 May 2021.

Covers the period from 1 May 2021 to the end of September. The amount of the fifth grant will be determined by how much someone's turnover reduced in the year April 2020 to April 2021.

One bonus for stages four and five are that they include people who submitted a Self-Assessment tax return for the tax year 2019/20 (as long as they did so before 2 March 2021), which the government say is around 600,000 newly self-employed people.

We are currently updating the calculator to give guidance on stages 4 and 5 and this will be published in the next few days.

Image: Working out the impact of a SIESS payment on UC award

After recent changes in Scotland and Wales we had hoped to see a widening of the eligibility criteria for workers on a low income who are asked to self-isolate if they are living in England, but the only announcement was that the £500 Test and Trace support payment would continue until the summer.

As lockdown eases this may be one for a future announcement. If and when the rules change, where relevant we will display one of the following 'other entitlements' to eligible people as part of their calculation result.

Where someone claiming Support for Mortgage Interest moves home, from 15 March 2021 they will be able to add the legal costs associated with transferring their claim to a new property to the value of their loan.

After being announced in last year’s budget that exemptions to the shared accommodation rate for Housing Benefit and housing costs in Universal Credit will be extended for various groups in October 2023, this will now be introduced in June 2021. The groups included are rough sleepers aged 16-24 (this currently covers 25-34 year olds), care leavers up to the age of 25 (currently this covers people aged under 22) and two new exemptions for victims of domestic abuse and human trafficking.

We hope you found this a useful summary. If we find more detail on any of the announcements we’ll post them on our social media channels, so please do follow us on Twitter, Facebook and LinkedIn.