A year ago we crunched the numbers on the amounts of people who are entitled to claim means tested benefits but don’t. Following today’s release of HMRC’s most recent Child Benefit, Child Tax Credit and Working Tax Credit take-up rates1 alongside the DWP’s recent take-up of income-related benefits2 we’ve updated the stats.

The latest picture allows us to look at the number of entitled non-recipient families and the amount of available expenditure which is unclaimed at the end of the 2016/17 financial year but, be warned, it’s not pretty reading for those of us in the benefit sector who want everyone to be claiming everything they are entitled to. 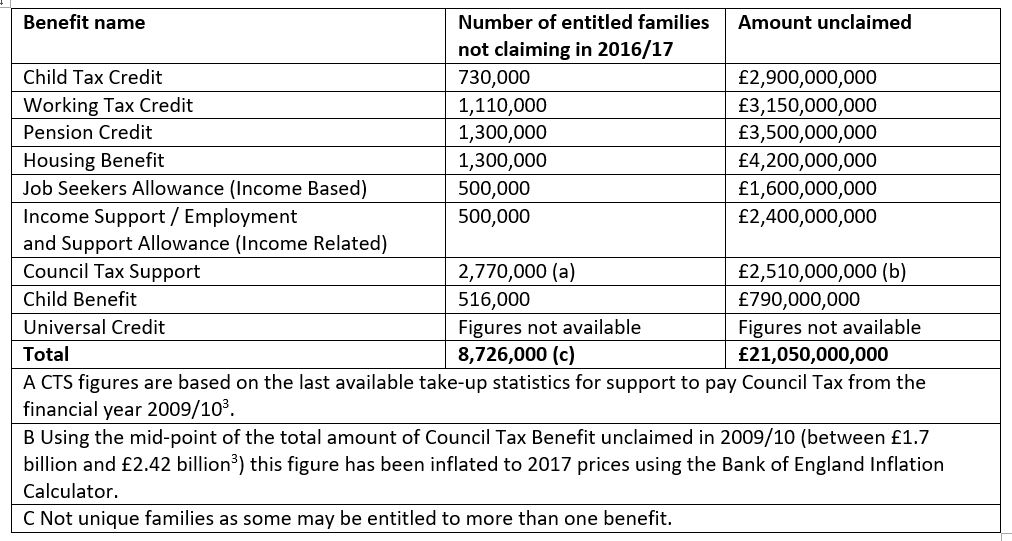 Comparing these numbers to last year some areas have become a little worse (less people are claiming tax credits) and some a little better (more are claiming Housing Benefit and Pension Credit). We have added Child Benefit to our table this year, as families where one person’s income is over £50,000 are no longer entitled to receive it, making it a means tested benefit.

Even after factoring in this change the overall message we can take from these latest statistics is that a similar amount of money remains unclaimed - around £20 billion.

Over the next few years we will have to watch what happen as Universal Credit takes the place of many of these benefits. At the moment there are no take-up stats for the new benefit but eventually the government expects that take-up rates in some areas will improve4 as several of the existing benefits are rolled into one.

This doesn’t touch the sides of the current levels of unclaimed assistance, but you can help solve this.

Help us encourage everyone to check if they are entitled, now!

Millions are still missing out on £1000’s of support that is rightfully theirs and it needn’t be the case. Even for those with no knowledge of the benefits system – and let’s face it the complex rules and regulations are enough to put many off - our free tools help people quickly work out what they may be entitled to. Please share it near and far.